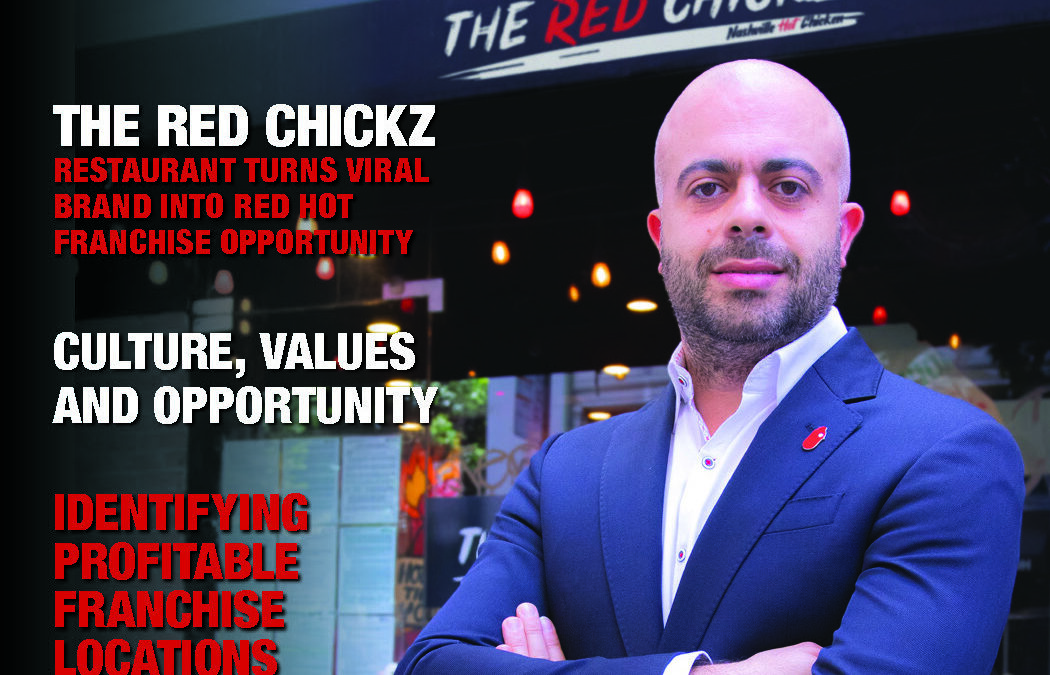 The Red Chickz, the hottest Nashville hot chicken brand, is making its mark on the west coast. 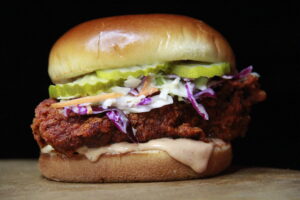 What started as a southern favorite, has now turned into a national phenomenon. As more and more restaurants catch onto the Nashville hot chicken craze around the country, The Red Chickz
has secured its place through posting mouth-watering content on social media platforms like Instagram and Tik Tok, leading them to gain hundreds of thousands of followers. The Red Chickz is
now announcing expansion plans to achieve their goal of sharing their twist on traditional Nashville hot chicken with as many people as possible through franchising.

“Been There. Seen That”

Founder Shawn Lalehzarian knows he is not the only one who is selling Nashville hot chicken, but he does know he is one of the ones who is doing it best. “We did a lot of market research. Nashville hot chicken was already popular, but there wasn’t a hot chicken concept in downtown LA back in 2017 or 2018. We felt it was the right move at the right time, but we wanted to do it authentically. So, my team and I flew to Nashville for two weeks. We asked everyone — from our Uber drivers to our hotel bellmen to the people we went out with — if they knew anyone who knew how to make hot chicken. A few folks introduced us to family members with their own homemade recipes, so we got to see different versions of it,” said Shawn. “It turned out that one of our Uber drivers had a cousin who actually owned a hot chicken restaurant, and we spent the whole day there. Back of house, front of house. They taught us everything from scratch.
We brought what we learned back to LA, added our own touch to make it really unique, and opened in December 2018. We’ve got one location downtown and another under construction in Culver City.” 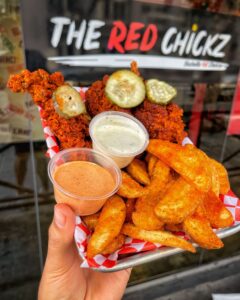 “Smile for the camera”

“The Red Chickz started out on Instagram like everyone else, and we also joined TikTok. It was relatively early for that platform — in 2018 or 2019, TikTok wasn’t nearly as popular as it is today,”
explained Shawn. “It took us 6-8 months to get to about 15,000 TikTok followers. Then once we hit 17,000, it just went crazy. If I’m not mistaken, we’re still gaining about 10,000-15,000 followers a week. Our Instagram does well too, but TikTok has completely taken off.” The Red Chickz’s various menu items have caught the eyes of thousands on social media, leading it to become one of the most popular Tik Tok accounts in the restaurant industry with over 838,000 followers. Whether it’s cutting into their crispy chicken tenders or artfully drizzling Comeback Sauce onto sandwiches,
viewers can’t get enough. Their Instagram isn’t far behind, with over 92,000 followers liking and commenting on their posts of the chicken up close to show off every delicious detail.

“Par!” After successfully catering the highly sought-after event in 2019, The Red Chickz is proud to be a sponsor once again for the 8th Annual ESPNLA Golf Classic at Black Gold Golf Club in Yorba Linda. The ESPN LA Golf Classic is an opportunity to play golf at a beautiful course, meet celebrity athletes and ESPN LA Radio personalities, witness a live broadcast, and enjoy breakfast, catered lunch and a post-round reception complete with food, drinks and amazing raffle prizes. But most importantly, the ESPN LA Golf Classic raises money for a cause dear to the hearts of millions, The V Foundation for Cancer Research ®. The V Foundation for Cancer Research was founded by ESPN and legendary basketball coach Jim Valvano with one goal in mind: to achieve victory over cancer. Since its start in 1993, the V Foundation has awarded over $200 million in cancer research grants nationwide. “Bon Appétit” The Red Chickz makes their Nashville hot chicken to order in six different spice levels and forms such as sandwiches, tenders, wings, and tacos. Shrimp is also featured on the menu and can be tossed in the same spice mixtures. To accompany the mains, The Red Chickz also has some classic Southern staple sides like potato wedges and coleslaw, and makes their own “Comeback Sauce” to dunk in. But don’t take our word for it, the reviews are in! One Google user says, “I love this place, chicken is amazing, full of flavor and really tasty. The staff is very friendly, and they provide utensils, sauces and napkins without asking for it. Great customer service and great flavored chicken. This spot is hands down the best and I will definitely be coming back for more!” Another reviewer raves, “MY GO TO SPOT FOR FRIED CHICKEN AND FRIES! Especially if you want something spicy! Their loaded fries are amazing and they are very generous so it’s a plate you can share.” “Alone we can do so little, together we can do so much” The Red Chickz have big dreams. They hope to be a national franchise someday, and are looking for franchisees that have the same passion and drive Shawn Lalehzarian had when he founded The Red Chickz. The initial investment necessary to open a single location ranges between $364,000 and $821,000. For more information about franchising, visit www.theredchickzfranchise.com.