When the pandemic hit in early 2020, the world initially looked pretty bleak through the lens of those in the business of entertaining. Yet now nearly three years since the global shutdown, what first looked like a death sentence for so many businesses built on the in-person experiences they provide has in fact proven to be a reset that’s sent experiential retail skyrocketing in terms of consumer demand. In this “post-COVID” world, we’re finding that people are more eager than ever to pay for a memorable experience they can enjoy with others in ways that cannot so easily be recreated at home.

At the forefront of companies successfully responding to this booming demand for memorable experiences is global franchisor Museum of Illusions, the world’s largest privately-held museum chain renowned for its unique spin on “edutainment” in the form of mind-bending optical illusions.

Here’s a peek behind the curtain at the magic driving the increasing popularity of this franchise concept among both customers and prospective franchisees alike.

The Origins of the Illusion 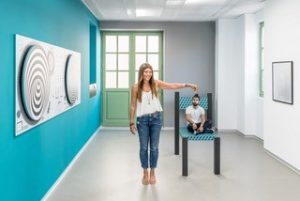 Founded in 2015 in Zagreb, Croatia, by entrepreneurs Roko Zivkovic and Tomislav Pamukovic, the Museum of Illusions concept was created in response to the growing tourist economy in Croatia, in which the founding partners saw an opportunity for an atypical museum to really stand out. The museum experienced immediate success, attracting thousands of customers just on its opening day and enjoying lines out the door for years following its opening.

It wasn’t long before Zivkovic and Pamukovic began receiving requests from other entrepreneurs looking to bring the museum to their own cities, thus prompting the pursuit of growth through franchising. Museum of Illusions’ first franchise location opened in 2016 in Slovenia, and the brand has since continued its growth via both corporate and franchise-owned locations to result in a network of 37 total museums open today spanning 25 countries across four continents.

Prepare to be Amazed…

Through continued innovation over the course of its international growth, what began as a singular Croatian tourism hotspot is now an international gamechanger in the realm of “edutainment.”

The state-of-the-art museums – of which no two are exactly the same – are designed for visitors of all ages to enjoy mentally-stimulating optical illusions, 3D holograms, challenging puzzles, interactive rooms and more. Accompanying each awe-inspiring exhibit is a deeper explanation of what the trick is behind the illusion at hand, giving the visitors a deeper understanding about the details and inner workings of the various installations and how they are capable of playing such convincing tricks on the human brain.

With anywhere from 60 to 80 visual exhibits featured at each museum, the concept has become extremely popular among social media users. Guests often take photos and videos documenting their Museum of Illusions experiences, with that user-generated content across various social media platforms serving as a powerful organic marketing tool for the brand.

The appeal of Museum of Illusions is unique in that it attracts a wide range of visitors, including not only locals but also tourists from all around the world. The museums have even welcomed celebrity visitors including Megan Fox and Samuel L. Jackson.

According to Museum of Illusions CEO Jonathan Benjamin, “The experience we offer to customers makes our museums something that people want to see in-person. And in a world where experiential retail is king, that’s the best business model you could ask for.”

To meet the growing demand for the experience it delivers, Museum of Illusions is on track to expand its footprint like never before, and in record time. So far this year alone, Museum of Illusions brought new museums to Budapest, Hungary; Tel Aviv, Israel; Philadelphia, Pennsylvania and most recently, Brussels, Belgium. Still ahead this year are new museums coming to Washington, D.C.; Phoenix, Arizona; Charlotte, North Carolina; Atlanta, Georgia; Rome, Italy and Marseille, France.

In pursuit of a lofty goal of opening 100 museums by the close of 2026, Museum of Illusions’ continued development is supported by the success of its unique and magnetic experiential concept, by the high traffic it drives to retail spaces thus making it a hot commodity among landlords, and by the franchise owners who take their museums to the next level in the communities they serve.

With experiential retail only increasing in popularity among consumers around the world, the time has never been better to go into business with Museum of Illusions. The brand is actively seeking potential franchise owners to drive its continued expansion, eager to connect with prospects who share the company’s enthusiasm for providing great experiences that are simultaneously fun and educational.

To learn more about how you can be a part of bringing the magic of Museum of Illusions to life, visit https://www.museumofillusions.com/#franchising-opportunity.